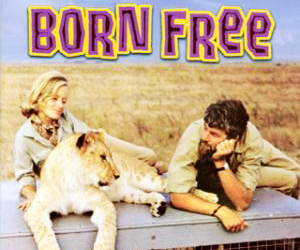 The Born Free Foundation – an international wildlife charity devoted to preserving our animal species across the globe and preventing extinction through careful and considered conservation and education – has had and is continuing to have a significant impact on the way the world cares for its animals. 2014 sees the 30th anniversary of this essential organisation, and it has had a touching and important history.

In 1964 Bill Travers and Virginia McKenna first travelled to Kenya to star in the classic wildlife film ‘Born Free’ – the inspiration behind the eventual formation of the foundation 20 years later. The film told the true story of George and Joy Adamson, who raised Elsa, a beautiful orphaned lion cub. They were later forced to give Elsa away, either to a zoo or release her to the wild. Having formed an everlasting bond with Elsa, Joy made the brave decision to work at releasing her back into the wild and natural habitat of Kenya – a move that changed public perception of keeping animals captive in zoos forever.

Spending the time in Kenya making Born Free had a profound effect on Virginia and Bill, which lead Bill to begin producing other wildlife documentaries. In 1969 ‘An Elephant Called Slowly’ was produced and was set to have a further profound effect on public perceptions. The story followed the fate of elephant calf Pole-Pole (Po-Lee Po-Lee) who was snatched from his mother as a gift from the Kenyan Government to London Zoo. Despite having no power to prevent the calf being taken from the wild and from its mother, the pair campaigned as much as possible to prevent the move, and worked tirelessly to ensure Pole-Pole’s welfare.

Bill and Virginia did not forget the plight of this little elephant. In 1982 they travelled to the zoo to see for themselves the fate of Pole Pole, and they found her lonely, frustrated, and aged by her experience in captivity. But, in a moment that changed Virginia’s life forever the elephant remembered them. As Virginia called out to her, she reached out to them in response. It was enough to rekindle their campaign to improve her life, and get her out of captivity. Unfortunately it was too late and in 1983, aged just 16, this influential elephant died – she lived a third of the life expectancy of an elephant in the wild.

Extremely saddened by the premature death of Pole Pole, in 1984 the Born Free Foundation was born. In its first guise the Born Free Foundation was established as ‘Zoo Check’ by Virginia, Bill and Bill’s son, Will Travers. They worked extensively to ensure the welfare of all animals in zoos across the UK, to ensure that zoos worked to provide the best conditions possible for animals. Still now Born Free works to phase out zoos and keep wildlife in the wild.

It was in 1998 that Born Free Foundation Ltd. was established as we know it today. The umbrella organisation now encompasses the Zoo Check campaign, Elefriends Campaign, Wolf Campaign, Dolphin Campaign, Primate Campaign, Big Cat Campaign, and the Bear Campaign. This was where the organisation really became a fundamental part of caring for animal welfare across the globe.

On its 25th anniversary in 2009 the Born Free Foundation thrust itself back into the media limelight and the public eye with a celebrity filled fundraiser in the Royal Albert Hall. Gabriella Cilmi, Martin Clunes, Bryan Adams and Joanna Lumely joined supporters to raise funds and to help save 25,000 animals world-wide.

In 2014 Born Free continues to change attitudes of humans and provide animals with a voice. By supporting responsible safaris Born Free seeks to protect animals, and to promote a variety of welfare campaigns such as fighting the Ivory Trade and hunting as a form of sport, challenging exploitation of animals in circuses and zoos, and opposing killing wild animals as bush meat. Through global initiatives they can respond to emergency situations and they currently participate in Global International coalitions such as the Species Survival Network, and the People & Wildlife project with Oxford University.

So their message is clear and one that we share. Animals need to be protected from human intervention and are best enjoyed where they can be healthy and happy: in their natural habitat.