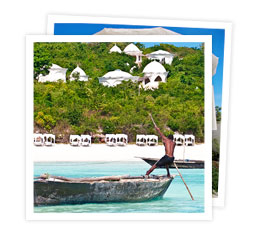 Dotted across over 50 acres of lush tropical garden and blessed with a secluded powder-white sand beachfront extending over half a kilometre, Kilindi Zanzibar with its arched pavilion style villas overlooks an ocean that has witnessed the spice trade route for over 500 years.

The Story of an Island Paradise

The very mention of Zanzibar - the beautiful and historic spice island lying just off the coast of Tanzania - is enough to conjure up a multitude of mental images that are both exotic and striking. It is this emotional reaction that has caused this Indian Ocean island to become one of the world’s most sought-after holiday destinations.

Stepping Back in Time

The island’s history is indelibly stamped by hundreds of years of trade in spices - nutmeg, cinnamon and saffron to name-but-three - with itinerant merchants traveling by sailing ship from as far away as Europe, the Middle East and even China. It has been this commodity - one as valuable as gold in its time - that has driven and shaped the cultural flavors of the island.

Zanzibar’s architecture, language and religion are a reflection of both the island’s distant and recent past; with the passing dhows that constantly sail along the coastline and the murmurs of the fishermen drifting on the sea breeze, that past is seemingly not so distant.

The magical island has been likened to that of a time capsule, one that has been unopened by modern tourism. And now - courtesy of Kilindi Zanzibar - the opportunity has arisen to unlock all that is best of this wondrous destination.

Did you know these facts about Zanzibar