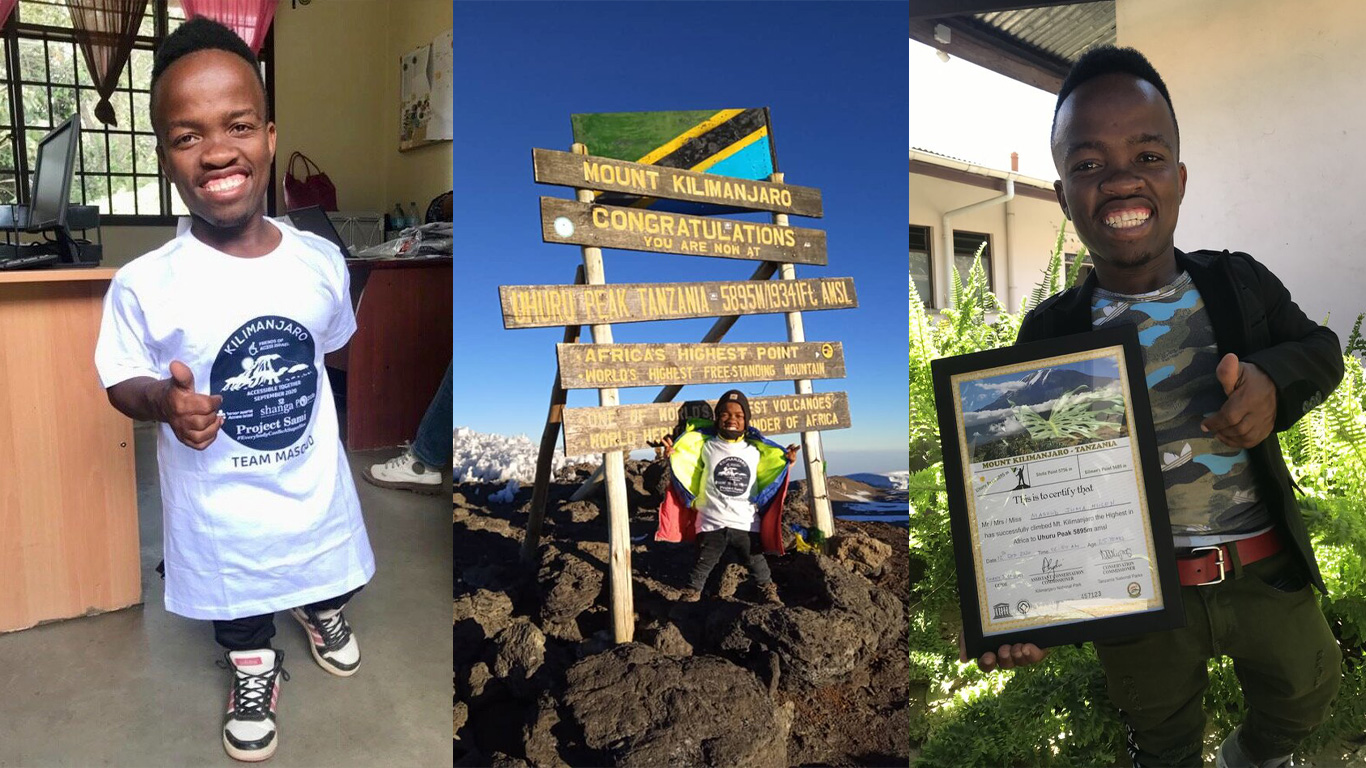 Exciting news out of Kili, Masoud, an artist at Shanga, became the first little person to reach the peak of Mount Kilimanjaro, summiting the peak on September 13, 2020. Born at the foot of the epic mountain and bullied for much of his life, Masoud’s lifelong dream was to climb to the Roof of Africa at 19,341 feet. Thanks to the support of Shanga’s own Business Development Consultant, Ruth Willatt, along with the help of Sabi Kweka, General Director of Popote Africa Adventures in Tanzania, Jamie Lassner of Friends of Access Israel (FAISR) and Sami, an 11-year-old altruistic New Jersey native who raised funds for the climb, Masoud was able to fulfil his dream last month at the age of 34. Masoud’s team included Omari Paramaba, a guide from Poptote along with a small team of German trekkers who launched their trek on Kilimanjaro’s Lemosho Route at the same time. Many of Masoud’s Shanga colleagues along with government officials were on hand to greet and celebrate with Team Masoud for this incredible accomplishment.

As Ruth noted, "Throughout life, connections, comments and promises are made but at times they are not made by people with as much integrity as Jamie Lassner. I met Jamie in 2019 when he visited Shanga and our meeting led to a promise to support Masoud achieve a lifelong dream to scale Mount Kilimanjaro. Through Jamie's tenacity and connections, Masoud's epic journey happened. Over the last few months Masoud, with support of his friends, trained daily, and spoke often about the upcoming adventure but on the day of his departure his excitement was so overwhelming it left him speechless. Supported by Sabino Kweka (“Sabi”) at the travel agency Popote Africa Adventures, Masoud summited the mountain on Sunday 13th September 2020.” Ruth continued “A special thanks also goes to Sami, an 11-year-old from the US who has not yet had the opportunity to travel to Tanzania but has a very caring heart and has made it her mission to see that our Masoud, whom she has never met, reached his goal.”

Due to the pandemic and curtailed international travel, FAISR conducted a virtual 19,341-foot climb, roll, walk, or run to raise funds and awareness on how to make the world accessible together. In Tanzania, Masoud completed the virtual event with the comradery of his friends from Shanga Village. Sami participated by biking and walking 19,341 feet and simultaneously decided that as part of her Bat Mitzvah (coming of age) celebration, she would make bracelets to sponsor Masoud to actually climb up Kilimanjaro because she firmly believes that “everybody can be a superstar,” shine, and achieve their goals. Sami succeeded in raising the funds for Masoud’s exciting challenge.

Sabi Kweka, General Director of Popote Africa Adventures in Tanzania, notes “Accessible travel is important especially when we have the tallest free standing mountain in Africa that is reachable by all who wish to trek it.”

Sami said “although I was not able to be with Masoud physically, I thought about him all week long. My heart was on Kilimanjaro helping him climb to the top, and that felt really great. Masoud may be a little person, and I’m only 11, but he has taught me that anything is possible no matter who you may be.”