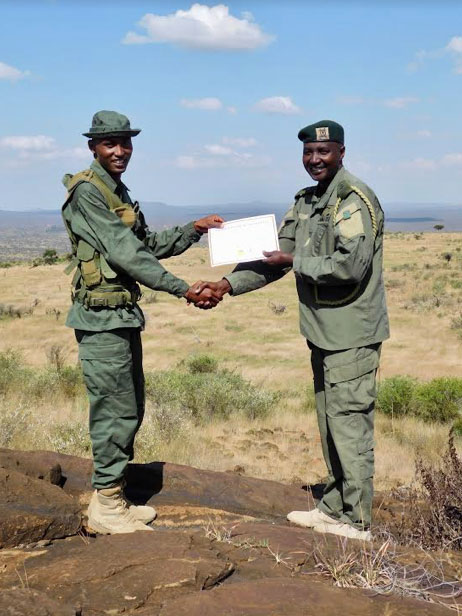 The Kenya Wildlife Service Headquarters in Nairobi celebrated World Rangers Day on Tuesday the 31st of July. The Security Manager for the Loisaba Conservancy Daniel Yiankere was one of 50 rangers to have won an award in the 2018 African Ranger Awards made by the Paradise International Foundation. This 10 year award program was implemented in 2017 by Jack Ma, the founder of Alibaba and co-chair of Paradise International Foundation, to support 500 rangers across Africa, and is given annually to 50 rangers who have made outstanding efforts to combat poaching, habitat loss, and the illegal wildlife trade.

Daniel became a KWS ranger 25 years ago in 1992, pledging to protect Kenya’s wild animals for future generations. During his service he has worked all over the country, in the Mara, Meru, Tsavo, Amboseli, Mt Elgon and Nairobi National Park, and is proud of the duty he has to conserve and protect Kenya’s wildlife resources.

He has been on Loisaba for over a year leading Loisaba’s security team of 64 Rangers and the canine unit comprising four bloodhounds, where recently he was key to the interception of 81 pieces of ivory in transit.

Congratulations Daniel for this will deserved recognition for his incredible hard work and diligence protecting Kenya’s wildlife over the years!