Bird Lovers are in for a treat when staying at Loisaba

While Loisaba is home to majestic lions, elusive leopards, magnificent elephants and endangered reticulated giraffes and Grevy’s zebra, it also hosts a spectacular array of a much more diverse class of vertebrates.

From the Verreaux’s eagle with a wingspan of 2.3 metres to the firefinch that only weighs 10 grams, guests staying at Loisaba have the opportunity to discover over 250 species of birds.

Here are some of our favourites! 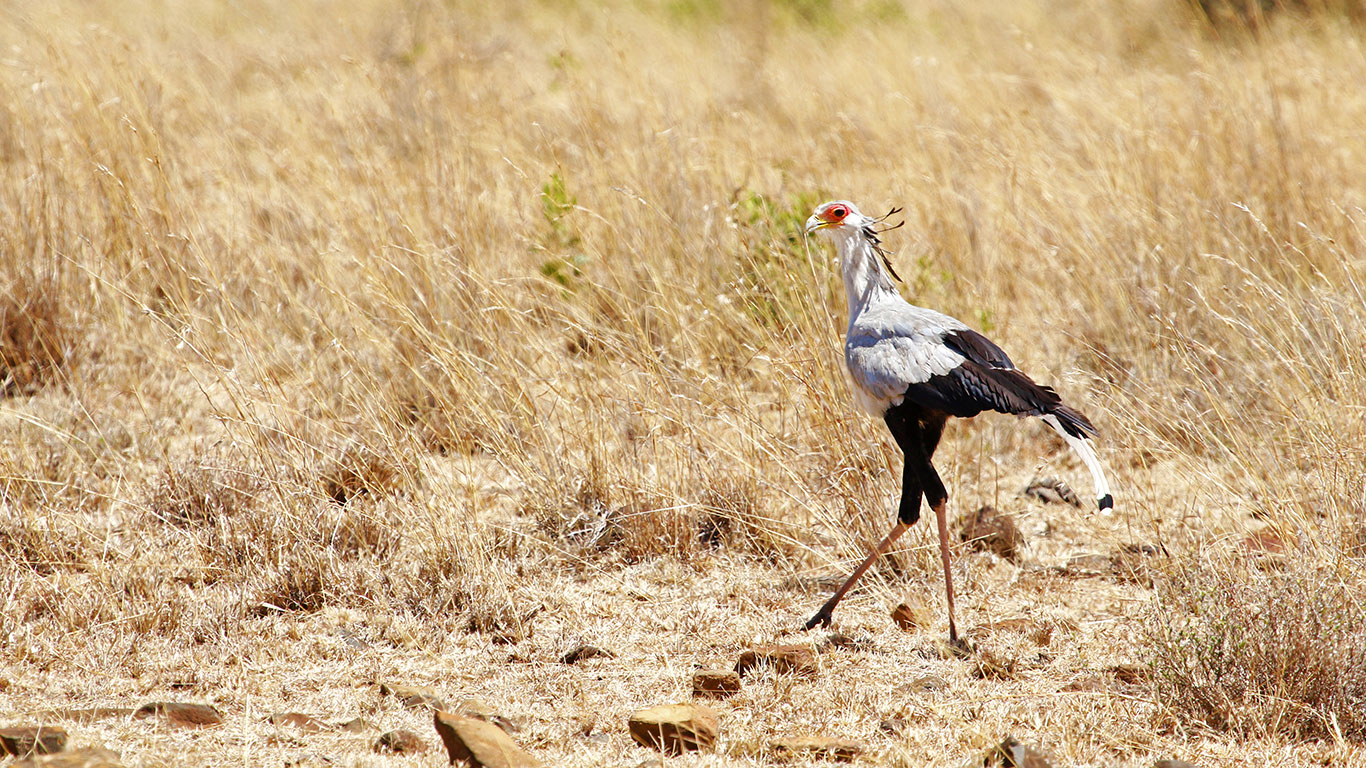 © Down To Earth Films

Unlike most birds of prey, the secretary bird is largely terrestrial. They have an incredible way of hunting that allows them to prey on venomous snakes. When its next meal is spotted, the secretary bird will stomp on a snake with a force about five times its body weight before throwing it high into the air to stun it, using its wings as protection from potential bites by flapping them to distract its prey. Smaller prey such as lizards and rodents are eaten whole upon catching them.

Studies of the secretary bird’s feeding technique has helped scientists shed light on the hunting strategies of the prehistoric ‘terror birds’. These were giant flightless predators that roamed the planet over 3 million years ago.

While the secretary bird’s taxonomic name Sagittarius serpentarius means “the archer of snakes”, there are different theories about the origins of the common name. One is that the feathers behind the bird’s head reminded 19th-century Europeans of the quill pens that secretaries tucked behind their ears. It is more likely, however, that the name derives from the Arabic saqr-et-tair or ‘hunter bird’.

Secretary birds are assessed as vulnerable by the IUCN due to a recent rapid decline across their entire range. 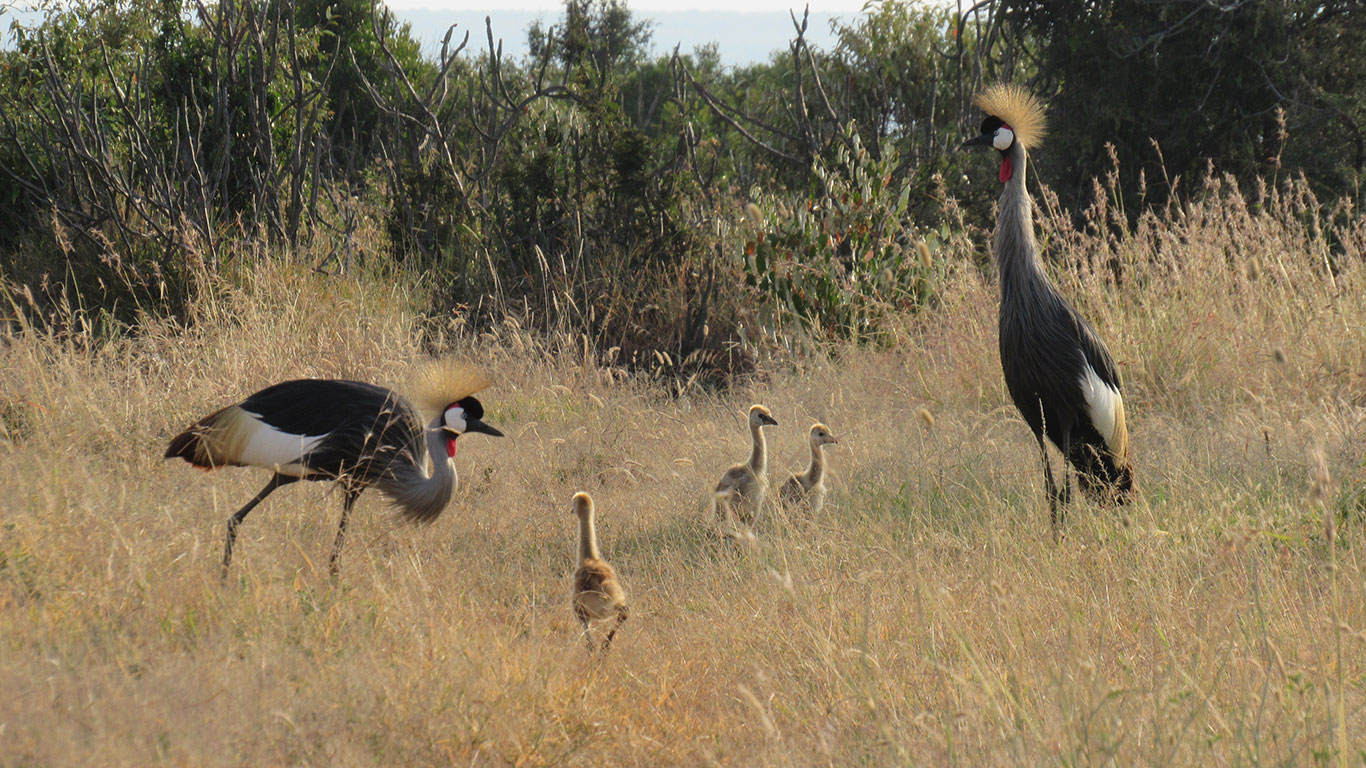 Standing over a metre tall with an impressive ‘crown’ , these birds can often be seen at Loisaba dancing! The grey-crowned crane has a display that involves an elaborate dance with various jumping and bows, which can be seen year-round including non-breeding periods. They are usually seen in pairs and are monogamous – meaning they stay with the same breeding partner for life.

They typically lay between two and four eggs in a clutch which hatch in around 30 days. This pair were spotted with their three young chicks near our Loisaba Stables! 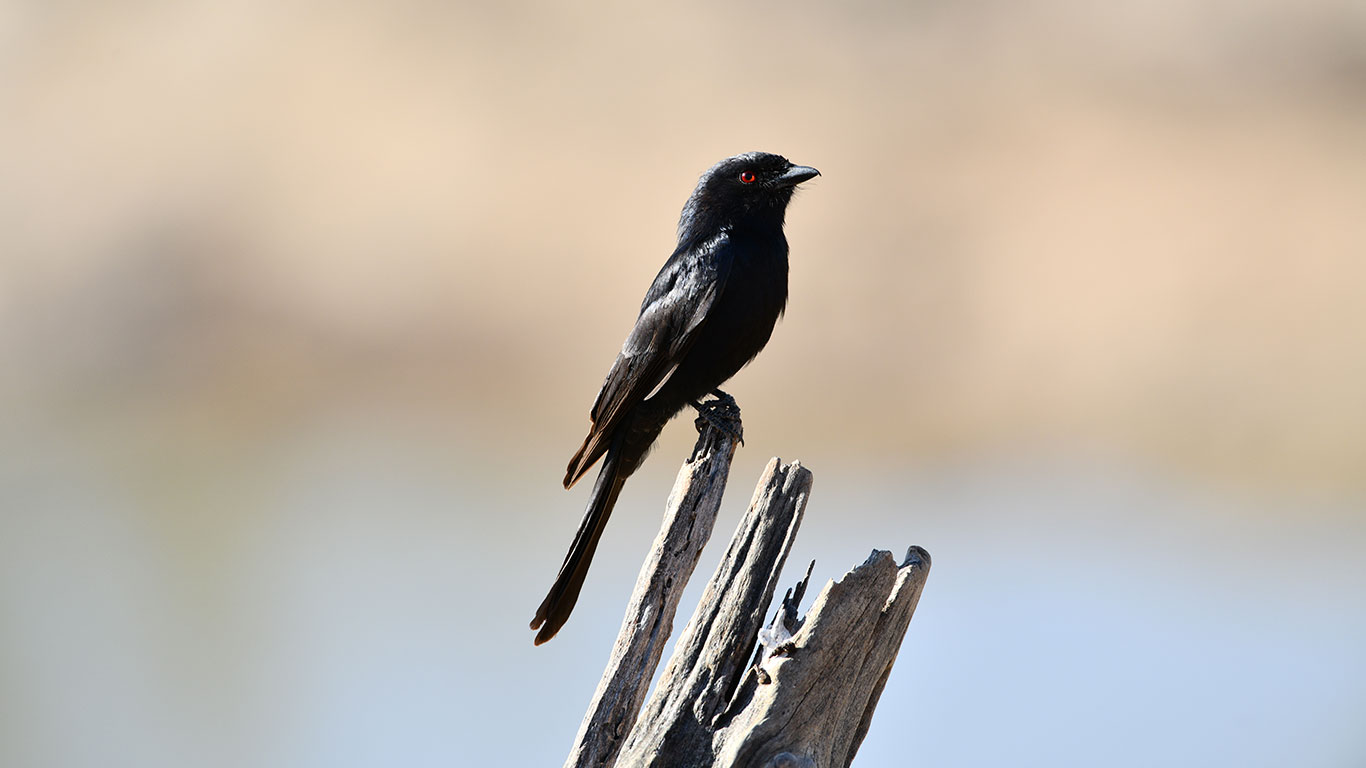 While the fork-tailed drongo’s appearance does not attract much interest, this little bird’s behaviour reveals that they are highly specialised and intelligent. As well as following large herbivores in order to catch insects that are flushed out by their grazing, drongo’s are known as ‘kleptoparasites’ – meaning they steal food from other animals. The drongo has the ability to mimic calls of other birds and animals, and uses this talent to distract foraging mammals.

As an example, the dwarf mongoose has a number of different alarm calls for different predators, and the drongo has learnt to imitate these calls. Once a mongoose has caught something the drongo will screech the mimicked alarm call, sending the whole colony scattering for cover and leaving behind the food that was just caught. The drongo then swoops in, picks up the abandoned food and heads back into the trees to enjoy the mongooses’ hard earned meal! 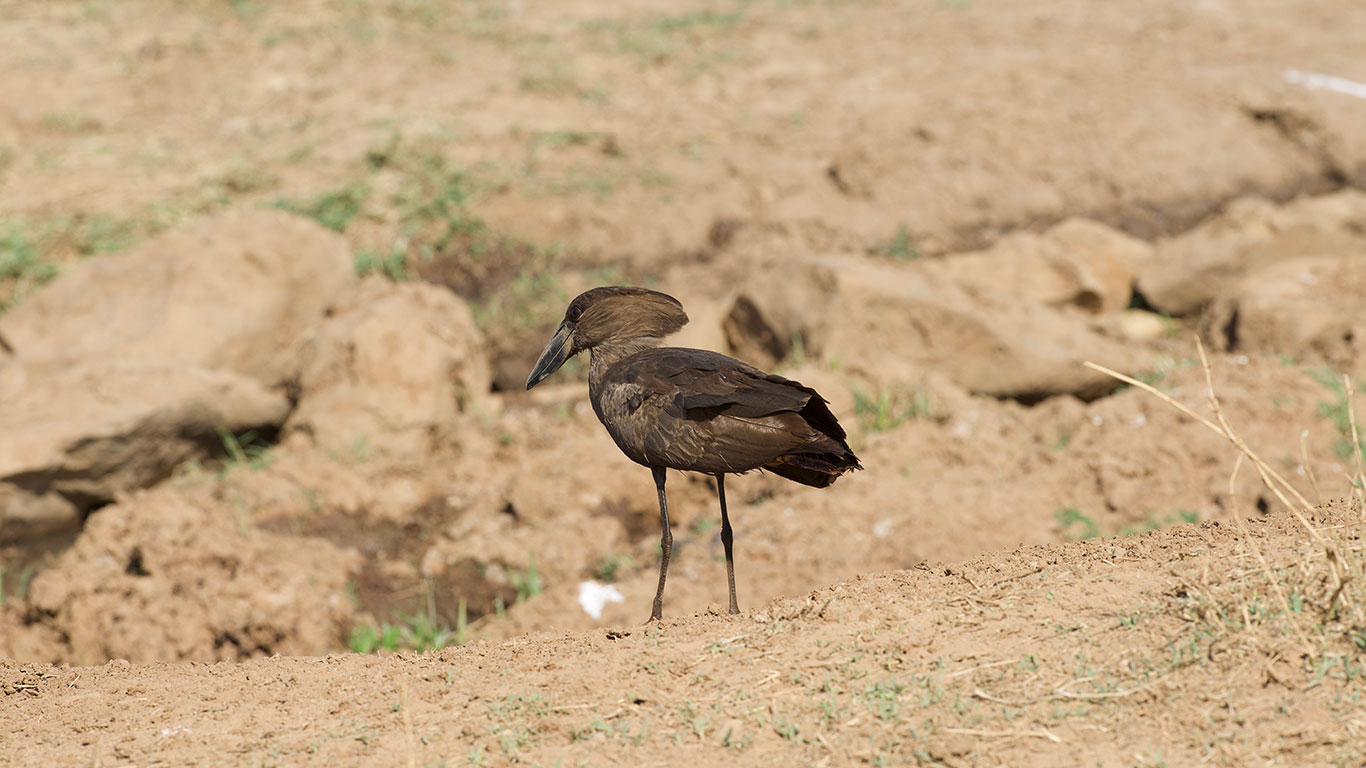 Hamerkops are wading birds feeding mainly on aquatic vertebrates, and build the largest nests in relation to body size of any bird. Standing 50cm high and weighing only 470g, hamerkops build nests that measure around 1.5m in diameter and 100kg (over 200 times their weight!).

These nests are so large that other species nests are sometimes found attached to the outside, and bigger birds such as owls often move into them. If this happens, the hamerkop builds another – and have been known to build up to five mansion like nests a year! 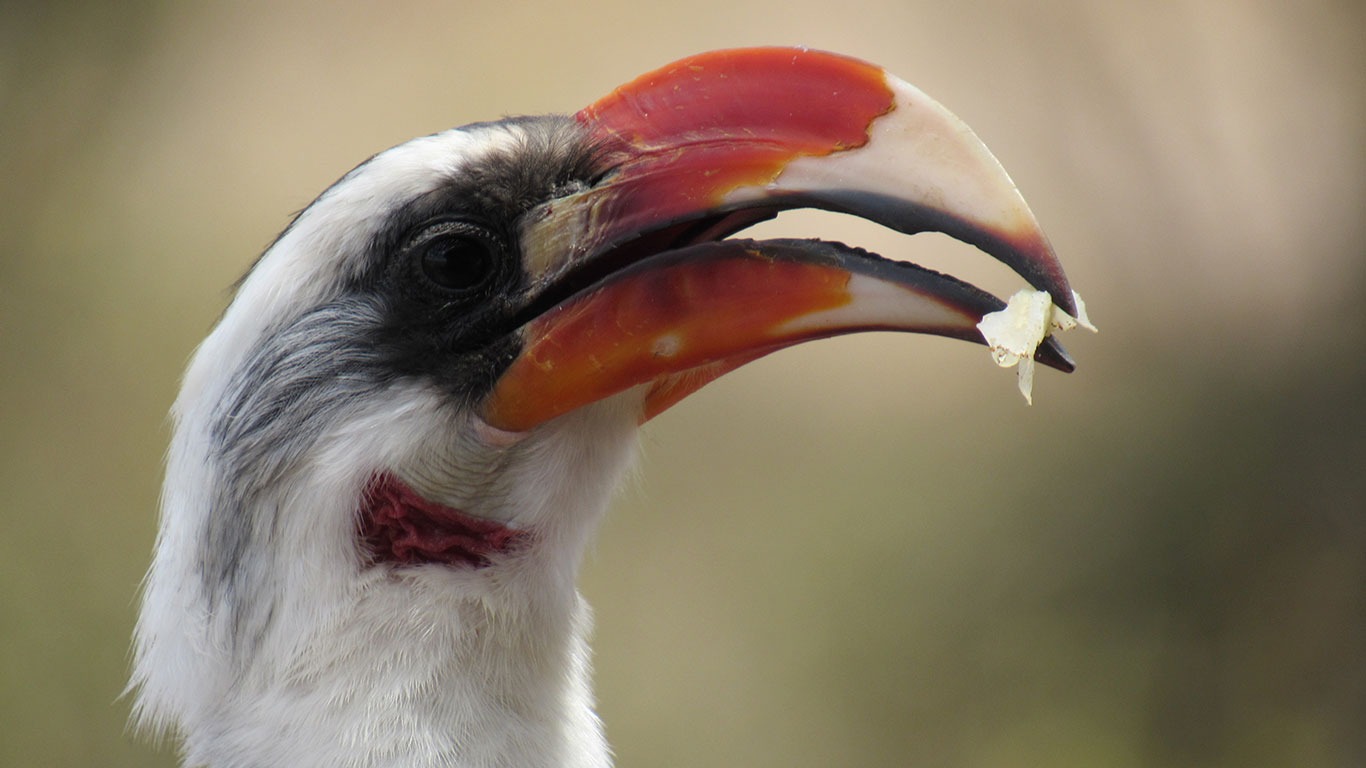 Hornbills are known for their unique breeding habits. Males find a tree cavity and entice females by bringing her ‘mudding’ material and food gifts. The female then works to close up the gap using dirt and faeces, which turn rock-hard when dried. When the hole is almost covered, the female enters and continues to block the entrance until a small slit is left. For over two months, males feed the trapped female and chicks when they have hatched.

The female breaks out about two weeks before the young in order to help feed them. When the young emerge they are fully flighted, though their parents will continue to offer them food for another week.

Loisaba’s mission is to protect and enhance critical wildlife diversity, abundance and habitat in the landscape, which sits on the western edge of one of Kenya’s most important elephant movement corridors. The profit from Elewana Loisaba Tented Camp, Elewana Loisaba StarBeds and Elewana Loisaba Lodo Springs, along with revenue from livestock, brings Loisaba Conservancy closer to achieving the ultimate aim of creating a sustainable conservancy providing protection of endangered species and their habitat, as well as over 300 jobs to the local community.